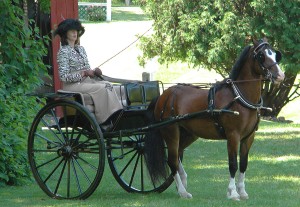 Between the Anthony home and the bank of the Missouri River sits a park, the first such public land dedicated in the whole state of Kansas. It is easy to picture Anna Anthony driving her horse along the road parallel to the river, or maybe even in the park itself. A few miles out of town lies Salt Creek, which sits in a wide flat plain where wagon trains assembled before setting off on the Santa Fe Trail to Colorado or even further.

From Martha’s Vineyard, Anna Osborn Anthony emigrated to Kansas when it was still very much frontier land, when the Indians camped along the ridges overlooking Leavenworth City and much of the land had no roads at all. In those days, D.R. wrote his father, you had to know where it was safe to ford the many creeks because few bridges existed. Much of the land is rolling countryside, and leaving the road always carried the possibility for the horse to step in a rabbit hole. In such cases, a rider could be stranded. Outside of the city, the trail would have been dust that turned to mud in the spring and fall. Knowing all this, Anna may have kept to established routes or stayed closer to town.

Wherever she was wont to take her horse and carriage, she must’ve gone in style. Fashions of the 1860s were much more formal than the 1890s era woman represented in this photo from Walnut Hill. When Anna was a bride, fashion dictated tiny corseted waists and voluminous skirts. Women typically bound up their hair and wore hats and gloves in public.

It would be fun to know whether Anna drove a fashionable phaeton or a more practical surrey which had a roof to keep out the rain and the blistering sun. Their Leavenworth home still has a carriage house at the back of the property where historians said you could still catch the scent of hay fifty years later. Perhaps, since the Anthonys were people of means, they owned both a phaeton and a surrey.