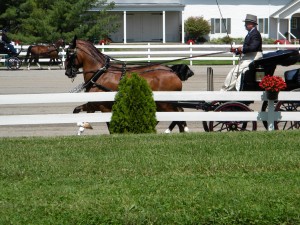 m Driving Competition (permanently ended now) that took place early this month in nearby Pittsford, New York offered an idyllic glimpse into the horsey set of the 1890s, an era when Anna Osborn Anthony could well have been driving her horse. Her sister-in-law Susan made reference to Anna’s custom of driving her stallion on fine days even when Anna was pregnant with her first child.

As the Walnut Hill brochure states,

At the competition, we saw a wide variety of both horses and conveyances. A team of huge black Freesians drew a four-in-hand carriage. A pony pulled a wicker phaeton, a picturesque carriage  characterized by the graceful arch in its floor, much like the sole in a woman’s high heel. While waiting to go into the ring, drivers exercised their horses in a parkland setting. I captured these drivers putting their horses through their paces and resting them in the shade before entering the competition.

Horses were very important to the Kansas Anthonys. D.R. made no secret that he stole several to get his horse farm underway, which eventually became quite a large establishment in Huron, Kansas. One of the Anthony granddaughters is pictured astride on the lawn on their home on the Esplanade overlooking the Missouri River in Leavenworth. And Merritt Anthony died of a massive heart attack while moving a wagon without benefit of his horse.