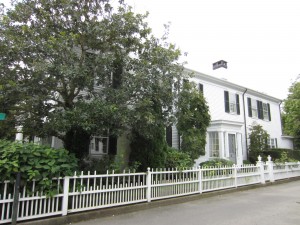 Martha’s Vineyard provided a setting for Anna Osborn Anthony’s upbringing that was both small town and major crossroads.

When Anna was growing up in Edgartown on Martha’s Vineyard in 1850, the population of her city numbered less than 2,000 people. At that time, Edgartown had only one elementary and one upper school. Residents shared a small community where families set down deep roots and grew, creating a network of interrelated blood lines. In her day, a three-hour sail separated the mainland from that island, which from then till now has encompassed only a hundred square miles.

Even though Anna’s island was comprised of a small group of people isolated by geography, its participation in the whaling industry gave it an international vibe. Visiting captains and sailors from halfway around the world were commonplace; many Portuguese-speaking people lived there because the Fayal Islands, off the coast of Portugal, were a common re-stocking point for ships that sailed from New England. It was not uncommon for ships to “lay over” four months at the Osborn Wharf in Edgartown while they were being refurbished.

Anna’s lovely white clapboard home sat on the bluffs above Edgartown within sight of her father’s wharf. A two-block stroll took her to the center of town, where her family could buy ordinary commodities as well as exotic goods from Japan or Portugal. She knew both men and women who had gone on three-year voyages, following the whales and wintering over in Hawaii. Her father owned several whaling vessels that filled their holds with whalebone, used for corsets, and with whale oil, used for heating and light.

Captain Abraham Osborn, Anna’s father, was twice widowed, siring a total of eight children; Anna was the sixth, a child of his second wife. Her mother died when she was only ten and her father married a woman also named Anna.

We have the names of Anna’s brothers and sisters but little other information about them, except an interesting reference in Susan B.’s diary saying that Anna’s brother John was living with Anna and D.R. shortly after the couple’s wedding. Susan was living with them at that time, too, teaching Anna to sew and keep house. After the four of them received the news of Lincoln’s death in April 1864, they went to different churches to hear what the preachers had to say.

We also have a compelling story about her older brother Abraham and the ship that he captained. More on that next time.

Thinking about Anna’s island origins and her emigration to Kansas raises many questions in my mind. What would prompt her to leave wealth and prestige to become the wife of a small-town mayor in a dusty, land-locked city? Did she find the island too confining and wish for a wider variety of scenery? Did she tire of everybody knowing everybody else’s business? Or did some secret heartache drive her away?

More than that, I wonder if she had regrets after moving to Kansas–whether she missed breathing the Vineyard’s just-washed air, gazing at the sunsets, or looking out onto the boundless sea.