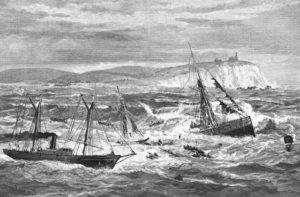 Storms off Martha’s Vineyard can get fierce with 35- to 40-knot winds and 20- to 25-foot seas. Read on for contemporary and historical accounts of sea rescues.In 2007 two crews braved icy decks in March 2007 to evacuate an injured man. Because choppy seas threatened to smash the smaller boat against the larger one, the two boats maintained a distance of two feet while lowering a rope ladder.

Closer to the Vineyard, two shipwrecks occurred at Devil’s Bridge during Anna Osborn Anthony’s lifetime.  The waters off the northeast end of the island hide a shallow reef running northwest toward the island of Cuttyhunk, with large boulders and a strong rip tide.

In 1859 the whaler Nantucket ran aground near Nashuwena Island off the Vineyard’s Coast , ending the voyages of a ship that was nearing its home port after safely sailing thousands of miles.

And in 1884 more than 100 people drowned on the passenger steamer City of Columbus and others were rescued by the Native Americans at the Life Saving Station.

The Gay Head lighthouse has long stood sentinel over Devil’s Bridge, historically staffed by Native Americans from the town there.

More personal yet was the wreck of the whaler Ocmulgee in 1862. Owned and operated by Anna’s family, the commercial whaler was confiscated by Confederates and burned while the crew was forced to watch.

Given these examples, it’s possible to imagine how Anna would have felt it desirable to move inland as far as Kansas to marry D.R. Anthony.