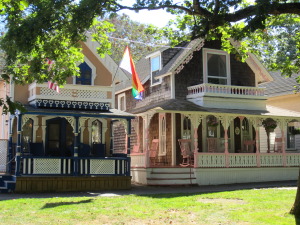 The Oak Bluffs cottages are only one room wide, built on the size of the original tents. Photo by Jeanne Gehret

One of the most picturesque features of Martha’s Vineyard is the Campground Meeting area, which began in Oak Bluffs in 1835.

At the meetings’ peak attendance, as many as a hundred thousand visitors thronged to this section of the island to camp for a few weeks in picturesque rustic dwellings, worship, hear renowned speakers, and enjoy the sights of Martha’s Vineyard. Originally begun by Methodists, the Meeting expanded to include Baptists, Congregationalists, and Presbyterians.

All this occurred within six miles of Anna’s home in Edgartown, where her father was an alderman at the Congregational Church that sat practically in the Osborns’ backyard. It would be interesting to know how this church-going family felt about the mainlanders who visited for the summer meetings.

The Campground Meetings at Oak Bluffs seem to have been a cross between the religious revivals of upstate New York and the cultural pursuits of the annual Chautauqua experience in western New York, which featured prominent speakers on timely topics. One speaker who must have drawn large crowds to the Vineyard was Josiah Henson, the real-life inspiration for Harriet Beecher Stowe’s Uncle Tom’s Cabin. As Martha’s Vineyard Campground gatherings became more well-known, other secular visitor attractions sprang up, such as tours of the island, refreshments, and other amusements.

The Oak Bluffs area (which was originally part of Edgartown, but is now its own town) owed its name to the grove of stately oak tree overlooking the ocean—an area where early visitors sat under the trees facing the speakers’ platform and sheltered in smaller, dormitory-style society tents for sleeping. Later, they enjoyed protection from rain and sun under a large tent and then the more permanent Tabernacle, erected in 1869. Sadly, the impress of chair legs and thousands of footsteps on the floor of the grove led to the loss of many of the original trees. Today, however, the shade of replacement trees makes the Tabernacle area as delightful as tourists must have found it in the days before air conditioning.

No doubt nineteenth-century islanders viewed the Campground Meeting visitors with mixed feelings, ranging from curiosity to gratitude for the influx of tourist income to a source of frustration as usually-tranquil towns and public services became strained by out-of-towners.