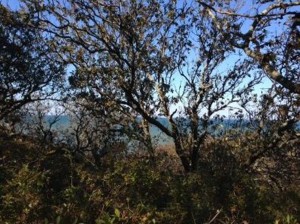 Anna Osborn Anthony, the heroine of the novel I’m writing, was both challenged and supported by her physical environment on Martha’s Vineyard. Read about trails like those she must have strolled on that magical outcropping of sand and rock off the Massachusetts coast. This photo shows a trail overlooking Vineyard Sound, which lies between the island and the mainland.

In its heyday, Vineyard Sound was a huge center of shipping and commerce, second only to the English channel for the number of vessels passing through. More than one slave slipped their bonds on the island in the decade before the Civil War, aided by a network of abolitionist supporters up and down the eastern seaboard. In my novel I’ve placed Anna squarely at the center of one such daring escape.

In many urban areas, byways like these trails and alleys are a thing of the past, but I have explored a few other interesting ones. In Rochester, we’ve biked on a public trail that goes between well-to-do estates and the shore of Lake Ontario. About ten miles into the city, an alley runs behind the Susan B. Anthony residence, and in Kansas the D.R. Anthony home backs up to a similar route. All of these afford glimpses of the rear and side yards of people’s homes, giving a more intimate view of their daily lives.

One of the most picturesque Vineyard strolls took place on the Bridge of Sighs (which no longer exists). This structure went from the island into the Edgartown Harbor, where wives, sweethearts, and mothers frequently stood to watch their men embark on whaling voyages that could last up to several years. I like to think of Anna standing on that bridge with her Daniel just before their wedding, sighing with contentment and anticipation.