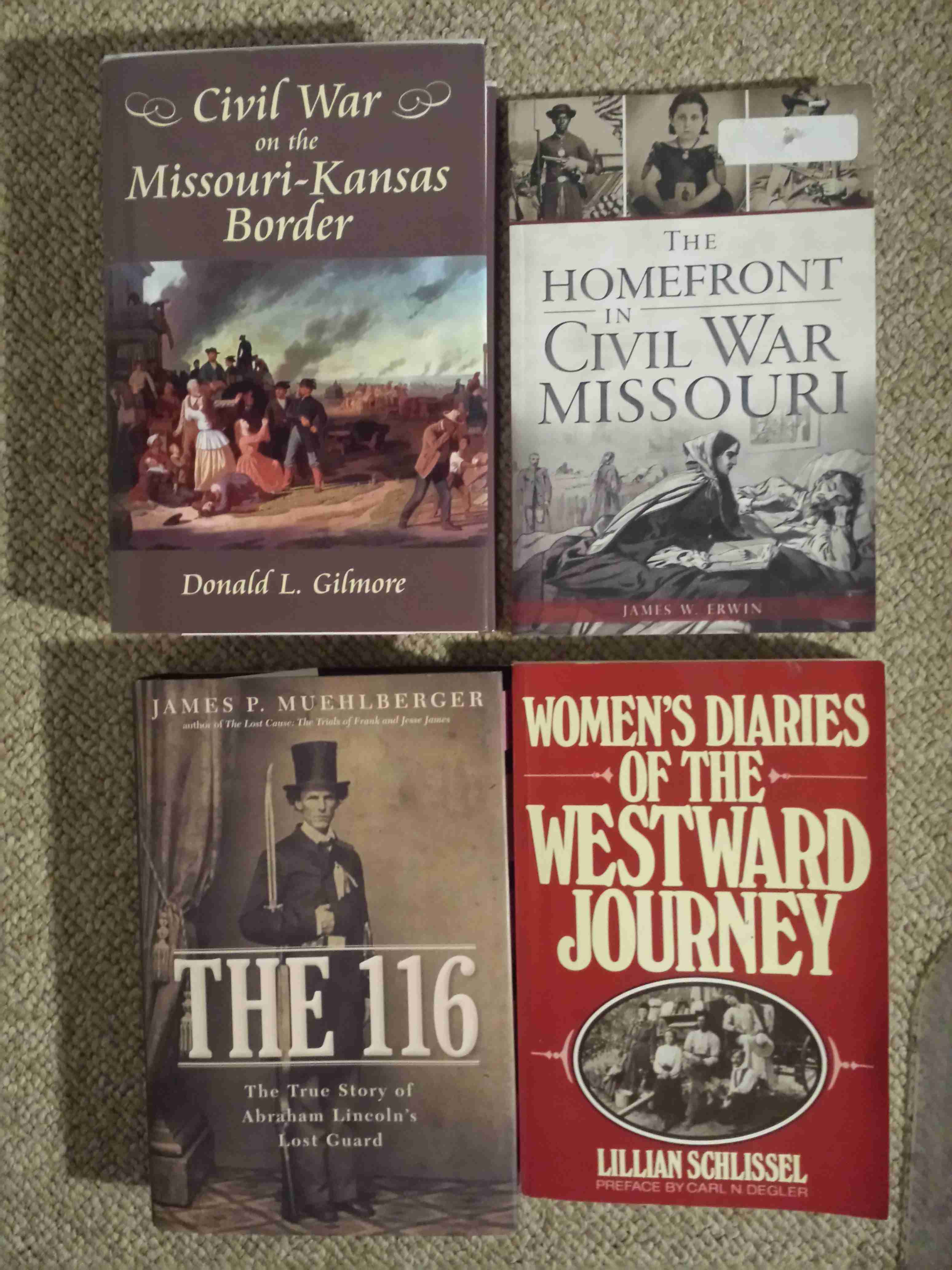 Here are some of the books I’m reading for my next novel in my Dauntless Series. They focus on contemporaries of Susan B. Anthony’s brother Daniel Read Anthony, who lived and fought on the Missouri-Kansas border before the Civil War and in its early days. Annie Osborn of Martha’s Vineyard moved to Leavenworth, KS after she married him in 1864.

Civil War on the Missouri-Kansas Border gives me a Missourian’s view on the Jayhawkers’ activities during the border wars on this state line preceding the Civil Wars. This author frequently mentions D.R. Anthony as part of ruthless wartime “depradations.” That’s what the 19th century liked to call atrocities against innocent civilians. This anti-D.R. view provides balance because I have many pro-Kansas accounts that paint Anthony as a hero.

I’m just starting The Homefront in Civil War Missouri. From this book I’ve already valuable information about what it was like to be a civilian in Missouri during those years. I was intrigued that the (Missouri) bushwhackers, opponents of the Jayhawkers, purposely chose to wage their war in their kinfolk’s towns rather than take it out to remote areas where civilians would not be affected.

The 116 is one of my favorite go-to resources. Decidedly pro-Kansas, it tells the fascinating story of how D.R., his opponent Tom Ewing, and many other Kansans camped on the floor of the White House for about a week. At the start of the Civil War, President Lincoln called upon them to protect him from abduction. Ewing later became one of Anthony’s arch enemies.

Women’s Diaries on the Westward Journey tells of otherwise unsung heroines (one of my favorite subjects). These stalwart women endured unbelievable dangers and deprivations while settling the West in wagon trains. Many marked their days by listing how many graves they passed each day while walking across the country beside oxen. Cholera caused many of these deaths.

Others gave birth on the trail and were back on the treck the next day due to the urgent need to arrive before winter set in. Although none of the major characters in my Dauntless Series will have arrived in Leavenworth, KS by wagon train, there’s nothing to prevent me from having Annie befriend one of the women who made this harrowing journey.

My next novel, which is about 1/3 done, focuses on Annie’s first two years in Leavenworth, a time of incredible upheaval.