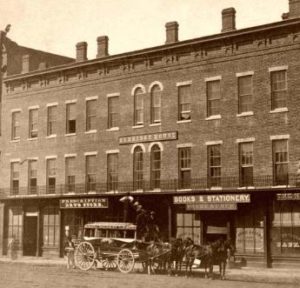 It wasn’t a midnight ride conducted in the midst of political danger. But then, Paul Revere didn’t ride 30 miles alone across Kansas wilderness in an evening snowstorm, either. What would prompt D.R. Anthony to set out on horseback late in the afternoon on January 29, 1861? Nothing less than the joyous announcement that Kansas had been admitted to the Union as a free state.

The fact of statehood was a significant milestone in the conflict that started with the 1854 Kansas-Nebraska Act, which said that those two frontier territories could choose for themselves whether to enter the Union as slave or free states. The conflict over which way Kansas would go earned it the moniker “bleeding Kansas.”

Just the previous day, D. R. had started a newspaper with his equally radical friend Daniel Webster (“Web”) Wilder. Both were Massachusetts-born and lived for a time in Rochester; both emigrated to Kansas in 1857. On the day the news arrived, Kansas legislators were meeting in Lawrence at the Eldridge Hotel. Leavenworth was the western terminus of the telegraph, which meant that the legislature in Lawrence would be ignorant of the announcement for a day or two.

Here is an account of how D.R. handled the breaking news:

“The news from Washington reached Leavenworth by telegram and an extra edition of that publication with glaring headlines was issued late in the afternoon. With a bundle of ‘extras’ Colonel Anthony rode to Lawrence, where the last territorial legislature was in session. He arrived about 9 o’clock at night and rushed into the Eldridge House shouting the news. It set that Free State town wild with joy.

“‘It was a great stroke of newspaper enterprise,’ an old Kansan said recently. ‘But think of two radicals like Dan Anthony and Web Wilder publishing a paper called the Conservative!’”[i]

Another account mentions that D.R. announced the “momentous tidings” in each town or hamlet he rode through.

Photo of Eldridge Hotel 1867, courtesy of Legends of America