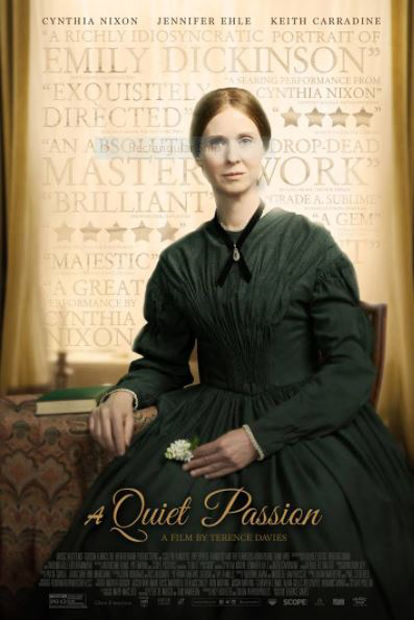 The film A Quiet Passion did not serve up the Emily Dickinson I know. Having read some biographies of Dickinson as well as her poetry, I have to say that the movie seemed pretty one-sided in portraying her life as one of angst and frustration. That’s part of her story, but there’s much more. True, artists (visual, verbal, and cinematic) achieve their goals by focusing on some things and eliminating others; but I think, when telling a life, we have some obligation to portray it accurately.

I wanted to see the movie because I have enjoyed Dickinson. Not only for that reason, but also because she was a 19th century woman. I wanted to soak up the scenery, room interiors, clothing, and customs of that period.

In this I was partly satisfied. It opened with an accurate view of her doubts about organized religion. We learned that she had mixed feelings about marriage, as did many other women of that era. That rang true for me because I know that  Susan B. Anthony and Elizabeth Cady Stanton also objected to the way marital advantages fell more to men than to women.

However,the film over-developed (at least IMHO) the Victorian preoccupation with death. At least 2/3 of it involved someone’s slow demise, as well as Dickinson’s anticipation and reaction to those deaths. The clothing was beautiful, but the film skimped on scenery and interiors. We got a strong dose of Dickinson’s irritable reclusiveness as her final illness progressed, but little of her joyful and whimsical poetry from earlier in her life.

Altogether, the movie reminded me of a self-absorbed poetry student I once knew who believed that people have to be miserable in order to write good verse. Apparently, the filmmakers were of a similar mind.

Well, I beg to differ. Emily Dickinson was a multi-faceted individual and poet, but you wouldn’t guess it from A Quiet Pasion.

Next time: Ruminating on history.