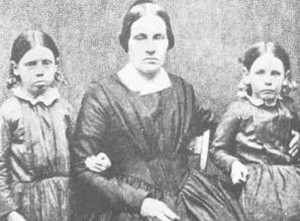 Mary Ann Day Brown with two of her daughters about 1851. Library of Congress.

Part of the intent of this blog is to recognize spouses and other family members who lived in the shadow of famous people. One such person was Mary Ann Day, the second wife of abolitionist John Brown.

Mary was only seventeen when she married Brown, for whom she had kept house after the death of his first wife Dianthe. At the time of their marriage, he had five children, and Mary eventually bore thirteen more.

Before he was hanged to death on account of the debacle at Harper’s Ferry, Mary had the opportunity to visit her husband and share his last meal.  At that point, three of their sons had died at their father’s side, and one more would die within the month. After John’s execution, she took his body back to the farm in North Elba, NY, where you can visit his grave today.

Mary was apparently of the same mind as John, for she said,

“I have had thirteen children, and only four are left; but if I am to see the ruin of my house, I cannot but hope that Providence may bring out of it some benefit to the poor slaves.”

Mary moved with several of her children to California in 1864, where she died 24 years later.

In this era of the United States’ moral ambiguity, it is hard to imagine a husband and wife risking their lives and putting their children in jeopardy in pursuit of a cause. But perhaps it takes someone with such single-minded ambition to bring about sweeping change.

Next time we will look at how the Anthonys and several of their well-known friends responded to the death of John Brown.