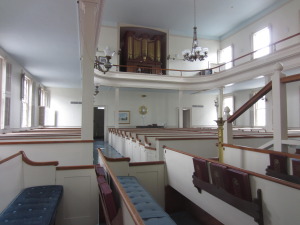 In choosing a winter wedding, Anna Osborn departed from the Victorian custom of marrying in the warm months when orange blossoms and other flowers were in abundance.

Flowers would have been hard to come by in January 1864 unless there had been a glass house (conservatory) on Martha’s Vineyard. If I were decorating this church for a January wedding, I would use evergreen boughs and berries, putting a sprig on each box pew and hanging garlands from the balcony. Lovely!

The Congregational Church where Anna was married (now known as the Federated Church) has changed little since her day. Even on a cloudy day, the two stories of windows let in plenty of light. Built in 1828, it is the oldest island church remaining on its original location and still used for worship.

If you look at the far end of the photo above, you can see the door where Anna would have entered on the arm of her father and walked up the aisle. Most likely the sexton would have moved the pulpit at left in the next photo to provide a space for the couple to say their vows. 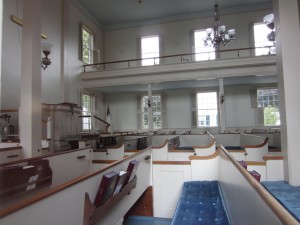 Even in Edgartown, Massachusetts, the whale oil capital of the world, it is hard to imagine heating this balconied church in the dead of winter. Wouldn’t the bride have looked lovely in white velvet and fur?

Anna Eliza Osborn was only nineteen when she wedded Daniel Read Anthony, twenty years her senior—an ingénue marrying a seasoned warrior and hard-nosed businessman. Her groom may have worn his dress cavalry uniform with gold braid.

In attendance would have been her father and her stepmother, also named Anna Eliza—those nineteenth-century Americans did love to recycle favorite names! If they were still on the island, her brother Abraham and his bride Lucy of only seventeen days would certainly been there to celebrate, as would her siblings Timothy, Eunice, Francis, John, and Henry. The wedding could have been the last time she saw her father alive, since he died less than two years later.

I like to think that D.R.’s brother Merritt, who had married a few years earlier and also lived in Kansas, would have served as best man. We’ll discuss Merritt’s surprising wedding ceremonies next time.

1 thought on “Orange Blossoms for the Bride?”