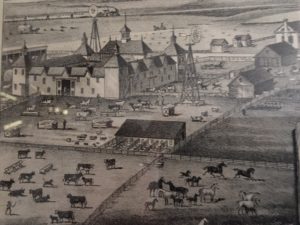 This is a copy of a portion of a large lithograph made by D.R. Anthony in 1888 of his prosperous stock farm in Huron, KS. In the upper left, note the train, which enabled him to get his horses and cattle to market. Subsequent generations of Daniel Read Anthonys continued to enjoy this farm and also recreational property in the vicinity of Martha’s Vineyard, MA where Anna Osborn Anthony was born and raised.

Today we continue with our guest post about Anthony’s farm, as follows:

In 1893, an apple orchard of 5000 trees grew on 80 acres of the ranch and a herd of thoroughbred Holstein cattle provided product for the Anthony’s “Huron Creamery”.   Both a school and the Presbyterian Church were constructed on Anthony’s land.  In 1883, Col. Anthony donated a new organ for the church as well.  DR Anthony Jr. had a cabin here where he could come to relax and hunt quail and pheasant.  Ball games and corn plowing contests, fires and a tornado are part of the history of the farm.   The tornado of 1891 caused $3000 in damage.

By 1910 there were 300 residents in the town of Huron, which included a bank, schools,  several general stores, a blacksmith shop, lumber yard, grocery store, hotel, drug store, hardware and implement house.

The Anthonys hired managers for the ranch over the years with the Starnes family providing the longest service, totaling 75 years over 3 generations.  D.R. Anthony III rented out the farm in 1962 and the Anthony family management  of 105 years came to an end.  In 1963, the main barn, long known as a local landmark, burned to the ground while D.R. III was spending the summer in Edgartown, Massachusetts on Martha’s Vineyard.  A 1959 aerial view showed the barn as the centerpiece of the farm.

In 1973, the Anthony property was sold.  The Huron post office closed in May, 1992 and the once thriving town seems but a mere dot on the vast Kansas prairie today. The current population of about 50 can be found among long-ago closed  or abandoned businesses and schools, many of which harken back to better days.  Little is recognizable on the expansive ranch west of town and many do not now know the Anthony name, so prominent many years ago.