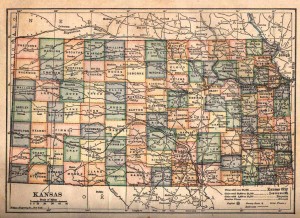 Daniel Read (D.R.) Anthony seems to have led a rather unremarkable life until he went to Kansas. In his early teens, his formal schooling was interrupted by his father’s bankruptcy. He helped out in his father’s cotton mill for several years, had a brief stint as a shopkeeper, went to Normal School (for teachers), and then taught for two winters.

Apparently teaching did not suit D.R. any better than it did his sister Susan, who retired from that profession to become a reformer at the age of 30. Eventually D.R. moved in with his parents, Susan, Merritt, and Mary on the farm in Rochester, taking up the insurance business alongside his father.

Dining frequently with Quaker friends and the family of Frederick Douglass, D.R. probably shared their outrage when the Kansas-Nebraska Act passed, declaring that those two territories could enter the Union as either slave or free states. In response, he placed himself at the center of the bloody skirmishes where Kansas bordered Missouri, a state that allowed slavery. Eventually this conflict escalated into civil war.

Anthony’s first foray into Kansas was with the Emigrant Aid Company, a Massachusetts-based agency that aimed to tip the scales for abolition in that territory. It arranged passage to the West and founded a stronghold against slavery on Mount Oread, where the University now stands in Lawrence, Kansas. The first party embarked from Boston on July 7, 1854 and arrived on the eastern border of the state at Kansas City July 29.

The group was smaller than expected owing to widespread reports of an outbreak of cholera in the Mississippi Valley. They traveled by train through Chicago, where D.R. noted that many had left the city from fear of pestilence, and on to St. Louis, where another member of the party wrote that many Missourians assured them that they too opposed slavery. There they boarded the steamboat Polar Star, where fellow traveler John Doy observed a mix of attitudes about slavery, including loud declarations by slave-owners that the emigrants would be tarred and feathered upon their arrival in Kansas City.

Dr. John Doy (mentioned in an earlier post) and D.R. were the only two pioneers from Rochester in that party that included 29 men. D.R., who listed himself as a banker, was also accompanied by carpenters, mechanics, farmers, architects and speculators, all of whom would have a role in building an abolitionist headquarters on the Kansas border of slaveholding Missouri.