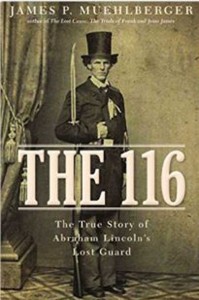 When the city of Washington was under siege at the onset of the Civil War, the White House feared that President Lincoln would be abducted. Read all about it in James Muehlberger’s excellent account entitled The 116: The True Story of Lincoln’s Lost Guard.

Friendly with abolitionists who had fiercely repulsed pro-slavery forces on the Kansas-Missouri border, Lincoln accepted those fighters’ protection when he was a virtual prisoner in the White House in April 1861. Thus, Daniel Read (D.R.) Anthony joined 115 other select guerilla fighters who camped on the floor of the East Room. While stationed there, they employed a bold propaganda campaign which, coupled with their already warlike reputation, saved the Union from an impending occupation of the nation’s capital.

Most of the men who gave that brief but valuable service to the president seem to have been greatly affected–or perhaps they were already destined for greatness. D.R. himself became a force to be reckoned with as a colonel in the Kansas Seventh cavalry. Later he distinguished himself in several presidential appointments as postmaster and, in subsequent years, served as a Kansas elector for the Republican party.

Among the Frontier Guards, as the 116 were called, D.R. made longterm friends–and enemies. Lawyer Thomas Ewing, who collaborated with D.R. to rescue a kidnapped African-American, developed a longstanding disagreement with Anthony over horse-thieving and bringing the railroad into Leavenworth. In an interview written much later life, D.R. cited the railroad altercation as the source of his many violent encounters in ensuing years.