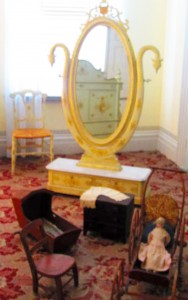 Wealth, power, prestige: the pleasure of these pales when family disasters strike. Despite their worldly success, the Leavenworth Anthonys were no strangers to hearthache. At such times, this well-known family withdrew into their inner circle and pulled the curtains to bear their private griefs. At least, that’s how it seems, since local newspapers have little to say about two of the three Anthony girls who died in their youth.

Madge, the second child of Anna and D.R. Anthony lived only five months, apparently died while the family was visiting Daniel’s family in Rochester, NY in April 1867. The only record of her short life is her tombstone in the Anthony plot at Mt. Hope Cemetery in Rochester. D.R. and Anna, married only three years, were at that time parents to two year-old Maude, their only daughter to survive to adulthood.

The family grew to include son Daniel Read Anthony II, Susan B. Anthony II, and Annette. But in 1888 tragedy struck again. Anna took five year-old Annette to Mackinaw, Michigan, where the daughter died. A short mention in a Leavenworth newspaper says that the child succumbed to a sudden illness and that D.R. left home to help Anna bring their daughter’s body back for burial in the Anthony plot in Leavenworth.

How strange that both little girls died so far from home. One can only imagine how the loss of this second renewed the grief of losing Madge almost twenty years earlier. But another shock was in store.