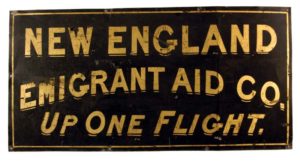 D.R. first tasted the West in July 1854, when he traveled there with the Emigrant Aid Company. D.R. noted in a letter to his family that although many fellow travelers on the steamboat Polar Star had warned them to expect proslavery animosity, the result was far different when they actually disembarked at Kansas City:

Many of the best citizens met us, extending to us a hearty welcome, expressing a wish that the thousands yet to come from the free states would come immediately. Even E.M. McGee, a slave-holder . . . hearing that the party wished to purchase oxen, horses, wagons, etc., called at the hotel with his span of bays and carriage, and took two of our party to his home, and sold them property to the amount of $300.

Unfortunately, within a few years the relations between pro- and antislavery factions would deteriorate and eventually result in considerable bloodletting. But for the first wave of pioneers from the East, the heat presented far more of an obstacle than verbal threats.

The heartland was experiencing a heatwave that month. One member of D.R.’s party logged the mercury at 120 degrees. As a result, the men set off for their destination during cooler nighttime hours. Some walked with the wagon train pulled by oxen, but others, too impatient to plod, chartered their own wagons and ponies. According to his own account, D.R. walked.

Passing through Westport, Missouri, which one traveler described as “pugnacious and fire-eating,” the group traveled without incident. They encountered the friendly Shawnee tribe and were wakened by the howling of prairie wolves. When they finally reached the banks of the Wakarusa River near Lawrence, one man reported that “the sun was pouring down its beams with terrific fierceness, and all nature shrank under the infliction. A high wind swept over the prairies, but it resembled the blast of a furnace. . . .” They determined that their location would be the base of the Company’s future operations, and set off to stake their claims on some land.