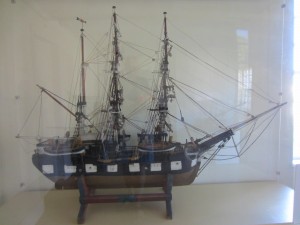 Model of a whaling ship seen at Martha’s Vineyard. Photo by Jeanne Gehret

In my last post I mentioned that Captain Abraham Osborn owned several whaling ships. One of these, the Ocmulgee, came to an untimely end early in the Civil War. Since the Ocmulgee was not a Navy ship, this was most unexpected.

Anna’s older brother, also named Abraham, was captaining the whaler in September 1862 when it was approached by the Alabama, a ship flying British colors. When it got within speaking range, the Alabama raised its true Confederate flag and the rebel captain informed Osborn that he and his crew were prisoners. After taking the Ocmulgee crew on board, the rebels set fire to the Ocmulgee, causing a huge blaze because it contained 300 barrels of barrels of oil. The Confederates detained the Ocmulgee officers and sailors for a few days, then finally allowed them to take small boats from the Alabama and row themselves six miles to the Fayal Islands.

Whaling crews came to dread the Alabama as much as swimmers fear sharks. The goal of the Alabama’s stealthy operations was to damage the economy of the Northern states, which were much more prosperous than the South.

This must have had considerable impact on Martha’s Vineyard. Crew members who were island residents had to make their way home and look for different employment. All the income from the ship was lost. Anna’s father tried to get the Union to reimburse him for this wartime attack, but never succeeded.

I have to wonder whether the loss of the Ocmulgee strengthened the island’s resolve to help runaway slaves. The Fugitive Slave Act of 1850 mandated Northerners to return freedom seekers to their masters and made it a crime to help them. Before the war, Vineyard sea captains were divided on their views of whether to transport captured slaves back to the South, as they were sometimes required to do. Some said that they would not interfere with commerce or break the law, while others inexplicably “lost” slaves entrusted to their care.

Where did Abraham Osborn stand on this issue, and did his stance change during the war and the sinking of his ship? This Civil War tale and others intrigued me during my visit to Martha’s Vineyard. More on this picturesque island next time. 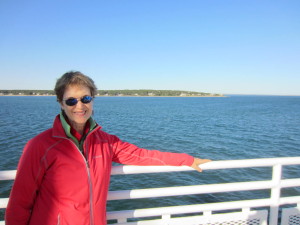 On the trip of my dreams, with Martha’s Vineyard in the background.