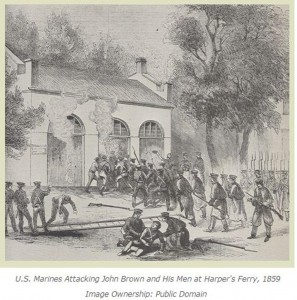 Brown attempted to capture a federal arsenal in Virginia, hoping to put the guns into the hands of slaves, a move that would have simultaneously enlisted the local slave population and free them. It was October 1859, two years before the official start of the Civil War. Brown’s troops, grossly undermanned, ended up dead or captured, including Brown himself who was subsequently hanged.

Brown’s raid at Harper’s Ferry has often been called the unofficial start of the Civil War, but I would argue that the Border Wars in Kansas (in which Brown participated (as well as Merritt and D.R. Anthony), actually started the hostilities several years earlier. Subsequent posts will cover the battle of Osawatomie, an example of Border War activity.

Abolitionists across the country were shocked, grieved, and fearful at the outcome. After Brown was imprisoned and arrested, federal authorities began tracking down those who had associated with him. Among these were the Secret Six and Frederick Douglass, who was a neighbor, colleague, and friend of the Anthonys.

Douglass was a neighbor to the Anthonys; a frequent dinner guest, he was much revered by Susan’s father Daniel. As John Brown was planning his raid on Harper’s Ferry, he met under cover of darkness with \Douglass to solicit his physical support. Douglass declined, but a friend of his who accompanied Douglass that evening did take part in Harper’s Ferry and died there.

After Harper’s Ferry, officials began hunting down Brown’s supporters, especially those known as the Secret Six, which included Gerrit Smith, cousin of Elizabeth Cady Stanton. Many of the Secret Six left the country; Smith, whose check for $100 was found in Brown’s pocket at his arrest, pleaded insanity and went into an asylum. Douglass caught wind of the news that Governor Wise of Virginia (a slave state) had enlisted President Buchanan’s help in capturing Douglass.

It is unclear from Susan Anthony’s writings whether she supported the violent approach that Brown was taking to end abolition, but evident that her bond of friendship remained strong during this time. Her brother Daniel, who had begun creating warfare of his own among Missouri slaveholders, likely shared his brother Merritt’s sympathy for Brown. As a result, Susan and Daniel helped fund Douglass’s hasty voyage overseas to safety.