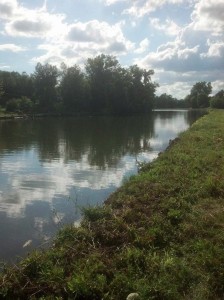 In 1845, when several of the Anthony family moved to Rochester, NY, this section of the Erie Canal probably looked much as it does today. Beside the waterway, donkeys pulled barges along a towpath. Other boats plied the canal, too, such as lineboats used to transport people with their goods.

According to Susan B.’s diaries, it  took the Anthonys a week or more to make their way by train, boat, and wagon from Center Falls, along the eastern border of New York State, to their new home in Rochester.

D.R. remained back east in Lenox, Massachusetts, probably for a job. There he enjoyed the companionship of Harriet Hosmer, mentioned in an earlier post. Eventually he, too, moved to Rochester and sold insurance.

A lot of history has flowed along the Erie Canal. Dug partly by hand, it employed thousands of laborers who lived and brawled along its path across the top of New York State. Their penchant for liquor may have helped bring about the Second Great Awakening in upstate New York, a religious revival that had such political and social offshoots as woman suffrage, abolition, and temperance. Moral and religious reforms were so hot that the area was referred to as the Burned Over District.

Not only did the Anthonys move to the Burned Over District, but they became neighbors with Frederick Douglass and fellow worshipers with Amy and Isaac Post, dedicated stationmasters on the Underground Railroad.

Within two years Susan became connected with her lifelong friend and reformer Elizabeth Cady Stanton (of nearby Seneca Falls). In the next decade, Susan would rise to national fame for her work on behalf of women.

Her two brothers would sear their brand into Kansas. Merritt fought with John Brown and D.R., alongside another Rochesterian named John Doy, helped to establish the city of Lawrence, an abolitionist stronghold amid proslavery enthusiasts.