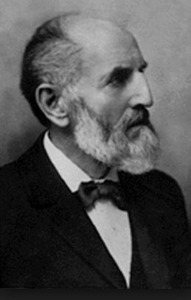 I love the term “pugnacious,” which describes someone just itching for a fight. That seems a fair representation of Daniel Read Anthony of Leavenworth, who was descended from the same stock as Susan B. Anthony. While this brother and sister were both devoted to the abolition of slavery, she fought with words, attempting to change legislation, while he wrote fiery articles and backed them up with bullets. (Besides being a Union colonel and Kansas Jayhawker, he founded a newspaper dynasty whose owners were all named Daniel Read Anthony.)

Here’s an excerpt from a colorful account of several Kansas editors whose combative natures emphasized their verbal onslaughts:

Dan Anthony I of Leavenworth deserves top billing among the pistol-packing pencil pushers. He fought a duel, was shot at numerous times, was seriously wounded once and killed a rival editor in his own home town. All of these incidents occurred during the territorial or early statehood days, and he carried two big horse pistols for many years and to his dying day these lethal weapons, ready to go, laid on or in the top drawer of his desk. During the later period of forty years he never had occasion to use this armament, but it was well known that “Ole Dan” was always ready. He mellowed a good deal as he grew older and while his likes and dislikes were just as sharply drawn and aggressively supported or opposed he learned to temper his violence materially.

Another significant difference between them is that D.R. married and settled in Leavenworth, KS while Susan remained single and became a citizen of the world. Many years she logged 100 speeches–think of that, two a day–many of them in different towns.

The photo of D.R. above depicts one of his quieter moments. Despite his warlike nature, he died of natural causes at the age of 80. Read about his most deadly encounter in The Truth About Daniel, coming in January.