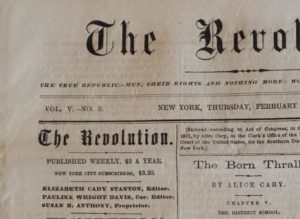 From the time she was a teenager, Susan B. Anthony hated writing. Early in her public life she lamented, “Whenever I take a pen in hand I seem to be mounted on stilts.”  It is ironic, therefore, that she left behind a literary legacy that included two years of a weekly newspaper, the four-volume set of The History of Woman Suffrage, and her three-volume authorized biography.

Despite her struggles with writing, she also became famous for giving thousands of speeches on antislavery, the restriction of alcoholic beverages, and the necessity of women’s rights.

To overcome her aversion to writing, Anthony collaborated.  From the beginning of her friendship with Elizabeth Cady Stanton, Anthony gathered materials for her silver-tongued friend to turn into prose. Then Anthony had the speeches and articles published and circulated. As time went on, Stanton mentored her friend so well that Anthony was able to make and deliver her own speeches, as well.

It’s likely that Susan learned about publishing when she visited her brother Daniel (D.R.), who owner a newspaper in Leavenworth, KS. During that period D.R. needed time to run his mayoral campaign, so Susan stepped in to run his newspaper, “limited only by his injunction ‘not to have it all woman’s rights and negro suffrage.’” (Harper, 243) (Below, here I am in costume in Atchison, KS trying out the printing press.) 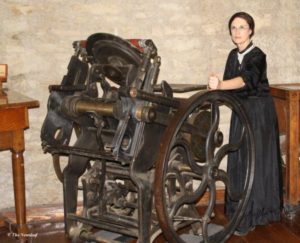 As always, Anthony left much of the writing to Stanton and others, focusing her efforts instead on fundraising, office management, and the actual production of the issues. From 1868 to 1870 their publication gave them the freedom to voice their support of women earning their own money and the necessity of women getting the right to vote. Called The Revolution, its motto was “Men their rights and nothing more, women their rights and nothing less.”

Radical as it was, The Revolution could not support itself through subscriptions and advertisements, especially after George Francis Train fell on hard times and stopped contributing. D.R. advised Susan to publish less frequently or print on cheaper paper, but she refused.

Eventually, the money problems of The Revolution grew critical and they had to cease publication with a $10,000 debt. In her journal Anthony lamented, “It was like signing my own death-warrant.”

When Anthony  “crashed” the U.S. Centennial Celebration in Philadelphia in 1876, she owed her strategic place on the speaker platform to D.R., who obtained a coveted press pass for her to sit there. From that vantage point she interrupted the proceedings to make a brief speech before distributing tracts in the audience and announcing her own meeting.

Nevertheless, the loss of The Revolution must have nagged at Anthony because when she received a bequest several years later, she spent it to fund a several-volume work entitled The History of Woman Suffrage. Although she embarked on this venture with Stanton and Matilda Joslyn Gage, she ended up buying them out.

Visitors to Anthony’s Rochester home can see early pictures of a two-story house followed later by those of a three-story dwelling. That’s because Susan and her sister Mary added a third-floor workroom to accommodate the History.

Writing and publishing takes time, energy, and cash flow. Alongside her many accomplishments promoting human rights, Miss Anthony marshalled her resources in such a way that she was able to leave her literary mark, as well.