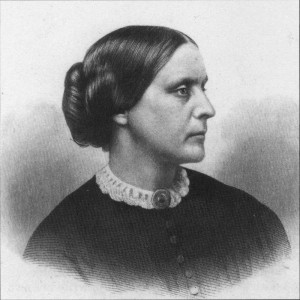 Although Susan’s early years were filled with bitter opposition,she became much loved for her tireless work on behalf of women and African-Americans. On Susan’s birthdays, many affectionate friends and family frequently lavished attention on her. One year her brother D.R. sent her a lovely silver-backed mirror.

On her fiftieth birthday, Susan had been living for two years in New York City, where she published a newspaper called The Revolution. Here is a description of her birthday party that year from the NewYork World:

A large number of friends and admirers of the private virtues and public services of Miss Anthony assembled…to congratulate the lady upon this auspicious anniversary…Miss Anthony stood at the entrance of the front parlor to receive her numerous friends. She wore a dress of rich shot silk, dark red and black, cut square in front, with a stomacher of white lace and a pretty cameo brooch. All female vanities she rigorously discarded–no hoop, train, bustle, panier, chignon, powder, paint, rouge, patches, no nonsense of any sort. From her kindly eyes…there beamed the sweetest smiles to all those loving friends who, admiring her really admirable efforts in the cause of human freedom, her undaunted heroism amid a dark and gloomy warfare, were glad to press her hand and show their appreciation of her character and achievements. (from Harper’s biography of Susan)

Harper noted that she received many beautiful gifts and also checks to the amount of $1000. Usually gifts of this kind were put directly into the service of the campaign for woman suffrage.

This photo of Susan at the age of 48 is reproduced from The History of Woman Suffrage and is my favorite picture of her in her prime. Many iconic images have depicted her as an old woman, but according to her biographer, she was still skipping on the sidewalk and running up the steps at the age of 80. Along with her determination, her vigor and stamina were a wonder to behold. That is always how I choose to portray her when I am in costume, as I will be this weekend at the Birthplace in Massachusetts.