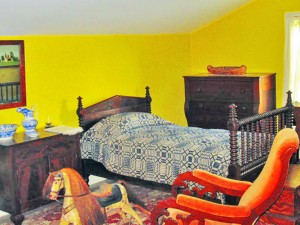 D.R. and Anna had five children, but three daughters died. Hard as it is to imagine today,such losses were common in the 1800s. Their surviving children were Maude Anthony, who married a soldier like her father had been, and Daniel Read Anthony II.

D.R. II’s career has been well-documented. Though much more mild-mannered than his father, he carried on the family business as publisher of the Leavenworth Times.

Maude seems to have led an interesting life of travel with her husband; she eventually moved to California with her widowed mother Anna. However, up till now I have been unable to find any photos or many written accounts of her. That leaves me to wonder whether the family deliberately shielded her from public view since she was female.

My recent visit to the Rose Hill Mansion in Geneva, New York gave me a taste of furnishings that were common in the latter half of the nineteenth century, when D.R. and Anna built their first home in Leavenworth. This photo from that residence portray a boy’s bedroom such as D.R. II might have had. Anna would have enjoyed a wide selection of household furnishings, since Leavenworth was the place where emigrants to the far West could buy things before continuing their journeys. Travelers reached Leavenworth conveniently, first by steamships working the Missouri River and later by railroad. D.R. loved the commercial aspect of his city and worked hard to bring the railroad there during his tenure as mayor.