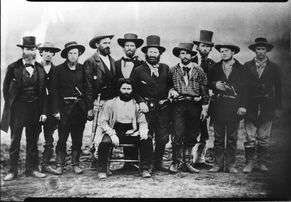 Here are the men who freed John Doy from a Missouri prison. Doy is seated. Used with permission from the Kansas History Project

Merritt Anthony, like his brother Daniel Read Anthony (D.R.), put aside the pacifism that is often associated with Quakerism and took up arms to free the slaves. In doing so, he joined one of America’s most radical and controversial opponents of slavery.

John Brown went to Kansas in 1855 and immediately stirred things up. He not only freed many African-Americans and sent them along the Underground Railroad, but he also, at one point, stated that he had “liberated 150 cattle from slavery” in Missouri. He soon became a target of southern sympathizers, and the attacks went back and forth. His massacre of proslavery men at Potawatomie Creek in 1856 and his brave stand against southern sympathizers at Osawatomie went a long way to earning his adopted state the moniker “Bleeding Kansas.” Daniel Read Anthony also pitched into that fray, but more on that later.

Merritt Anthony first took up residence in Osawatomie, about fifty miles south of Leavenworth, where D.R. settled. In between the two cities lies the city of Lawrence, an abolitionist-built enclave which D.R. helped to found in 1854. John Brown inadvertently caused much suffering to a friend of D.R. named John Doy.

Doy was a doctor from Rochester, NY. With D.R., he was among the first easterners to arrive in Kansas with the Emigrant Aid Company. Unlike D.R., he settled in Lawrence permanently. In 1859, the citizens of Lawrence decided that it was dangerous for ex-slaves to remain in the area and began escorting them to safer places. Brown agreed to lead one group and Doy another, sharing the men who went along as bodyguards. Unfortunately, Brown decided that his group was in greater danger than Doy’s, and departed first, taking all the guards with him.

Despite the shortage of guards, John Doy and his twenty-five year-old son Charles set off with their refugees and were beset by border ruffians from Missouri. The African-Americans were sent to the slave market and the Doys were taken to stand trial after spending months in subhuman conditions in jail. Charles was freed but John was sentenced for sixty-five years and moved to a more secure prison. In a daring escape, Charles and nine other northerners from Lawrence tricked the jailer and freed Doy. These valiant rescuers became known as the “Immortal Ten.”

Unfortunately, Charles’ encounter with mortality came even sooner than his father’s. About a year after the Immortal Ten became famous for their exploits, Charles Doy died at the hands of proslavery sympathizers. Soon after that John Brown, who put this father and son at so much risk, was hanged as an abolitionist martyr.

These principled, daring men were the associates, and probably heroes, of Merritt and D.R. Anthony.