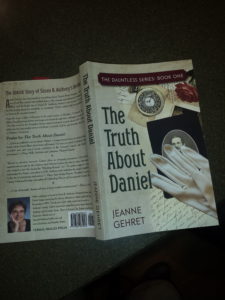 While we’re awaiting shipment of the first copies of The Truth About Daniel, here’s an excerpt from chapter 4 where Daniel and his sister Susan B. Anthony discuss his difficulties with courtship:

The Truth About Daniel, by Jeanne Gehret

Excerpt from Chapter 4, Pretense and Disclosure

…From what he knew of her so far, it seemed that Miss Anna Osborn was a good candidate. But he had only a few days to discover whether she might accept him as a suitor. Yes, she was very young. But maybe that was an advantage. The protected life she had led till now left her eager for new experiences, new horizons. That I can provide, for sure!

No doubt Susan would have an opinion on the subject, he thought as he watched her train approach from around the bend. Roaring into the station, it sighed to a stop. Susan, as usual, was the first one off, carrying an alligator purse that appeared heavy, judging from the angle of her arm.

His sister moved through the crowd with efficiency equal to his, for she had traveled more than anyone else he knew. Every hair was in place in the smooth pulled-back style she favored, devoid of flirtatious curls. Sturdily built and forty-three years old, she had a firm jaw and clear, far-seeing eyes that could focus equally well on tiny details. He noted with approval that she was not wearing her black public speaking costume, but something green that blended in better with Saratoga’s resort atmosphere. Maybe the reporters won’t spot her, he hoped.

“What have you got in your bag—gold bricks?” he asked as she kissed him on the cheek.

“Antislavery petitions to circulate in Rochester. And in Saratoga, if I get the chance,” she replied.

“Your letters haven’t mentioned much about women’s rights lately.”

“No. Mr. Garrison and the other antislavery leaders still want us to put all our energies on abolition for now. I disagree, but they assure us that after Congress passes an antislavery amendment, we’ll all work together on woman suffrage. So we go along with him. And how are you, Mr. Mayor? Are you missing your constituents?”

“Well, let’s just say that my desk will be piled high when I return. I don’t know what I was thinking to leave for two weeks in high summer. On the other hand, I don’t know how I thought two weeks would be enough.” He smiled and placed his bulk in front of her to clear a path through the crowd surrounding the baggage cart.

Within an hour he had helped Susan check in to his hotel and deposited her bags in her room before setting off for another stroll. “I’m doing an article on Saratoga, and I’d like you to meet some women I interviewed.” He was counting on his sister’s agreement, since he had already invited the island women to meet her that evening. They seemed impressed.

“How about dinner tonight? There are fireworks out by the lake. I booked a table beforehand overlooking the water.”

“Lovely. I’ve never seen Saratoga Lake.” She paused at one end of a long fountain, where a crouching marble figure was spitting water toward a similar figure at the other end. She laughed. “Reminds me of some politicians I’ve known,” she observed, bending to read the nameplate of the sculptures. “‘Spit and Spat.’ How appropriate!” They chuckled.

“The thing is, Susan, I want you to meet Annie. She’s one of the daughters of the women I interviewed.”

Susan cocked her head, interested. “Oh? Does she need help? Or might she assist our reform? Tell me more.”

Daniel’s sister frowned at his turn of phrase.

He shrugged. “Sorry. I know women are people, not things. But I am looking for a very special woman, and I don’t have much time. So I have several criteria in mind.”

She would not be appeased. “Blonde or brunette? Short or tall? Strong or fragile? Really, D.R., you don’t pick out a wife like you do a horse.” She stopped dead on the path, causing a pair of strolling women to weave around them.

He took her arm. “Please don’t just stand there. Hear me out.” When she resumed walking by his side, he told her the qualities on the list he had made earlier.

“Well, that’s better,” Susan allowed. “But unless you’re already well-acquainted with this particular woman, you’ll be hard pressed to win her heart in two more days.” She shook her head to emphasize the difficulty of accomplishing such a feat.

“I forgot how stuffy this town is,” he concurred. “Chaperones everywhere. Did you see that courting chair in the lobby?” He had been puzzled, then appalled, when he regarded the ornate piece of furniture that resembled three separate chairs glued together facing each other. How could you ever get to know a woman with a chaperone listening to every word? He had avoided that corner of the lobby all week.

Susan nodded, her air of disapproval fading. “I’m surprised to hear that you, the perennial bachelor, would seek a wife. My, my.” She paused to consider. “Do you think she’ll have you—” she looked at him archly       “—even with the Anthony nose?” She pulled a long face as she said this.

He laughed as she had intended, harking back to a time when a young woman had confided to Susan that she might consider marrying D.R. if not for the Anthony nose. “Maybe I better look for a nearsighted woman,” he said.

“Long-distance courting will be difficult,” Susan warned. “Too bad you never found a girl in Rochester, where you could take your time getting to know her.”

He shook his head. “Too many Quaker caps. Can’t pick out a woman without seeing her hair.”

Looking, amused, she continued, “Why haven’t you met anyone in Kansas?”

“Most of the women you meet in Kansas are already married—they’d never set foot there without a husband. It’s too—raw. Still mostly untamed. And the ones who aren’t married—well, most are not the kind of woman I’d want to meet in the light of day.”

Susan looked away as if reflecting on the prostitution problem in the West. “Where’s her home?”

“Martha’s Vineyard. Right across the water from where Fred Douglass lived when he first escaped from the South. She’d have to move to Leavenworth for it to work. I won’t compromise on that.”

D.R. watched as she retied the ribbon of her hat, which looked like a pillow strapped on top of her head. “You know, Suse, even I can see that your hat does nothing for you. Would you like to get a new one before dinner?”