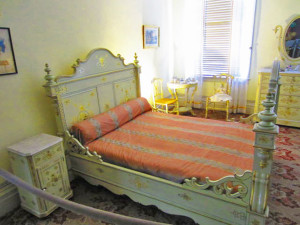 One of the most poignant mementos among the Anthony archives is a small packet of news clippings tied with a black ribbon. When I carefully unfolded it, therein lay two or three articles from Leavenworth papers detailing the death of Susan B. Anthony II at the age of 17.

Young Susie had been ice skating with three other teens on a pond when she and her partner fell through the ice. Although the friends immediately tried to rescue the pair, they both died almost immediately. One can only imagine the community’s grief–the shock of loss on high schoolers’ faces, the sorrow of the man who owned the pond, the tolling of church bells and the appalling sight of two caskets in the same week. Add to this the fact that five year-old Annette Anthony of the same family had died the year before, and it becomes almost incomprehensible.

Susie, named for her famous aunt Susan B. Anthony, was born in September 1872, just two months before her namesake cast her illegal ballot for woman suffrage. Susan learned of her niece’s death while buying a newspaper in Cincinnati, and set off immediately for Leavenworth. In her diary she reminisced on how she and Susie used to sleep in the same bed (perhaps resembling this one I photographed at Rose Hill Mansion), and how the five-foot-six girl didn’t walk, she “skipped and danced.” The grieving aunt repeated what she must’ve overheard about Susie’s last morning, when she drove her buggy proudly as she did “every day with Mama or a schoolmate or alone.”

Susie’s death was the last in a series of tragedies for the Leavenworth Anthonys, although a gunshot on their lawn could easily have taken the life of either D.R. or his son.