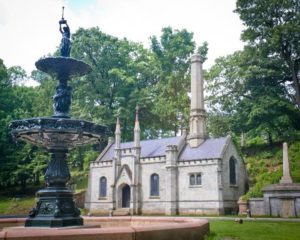 Mount Hope Cemetery, where Susan  B. Anthony is buried, has been a special place ever since its founding in 1838 on a rural hillside a mile outside of Rochester, NY.

Now surrounded by the University of Rochester and busy city streets, it remains a serene location to remember loved ones and many notables like the founders of Bausch and Lomb; James Cunningham (manufacturer of carriages); Myron Holley (overseer of the Erie Canal construction); and abolitionists Isaac and Amy Post.

The first municipal cemetery in the country, Mount Hope was laid out by a professional landscaper on a 50-acre plot that has increased over the years to 196 acres. In addition to some lovely wooded hills, it also features unusual landforms known as kettles—shallow, sediment-filled bodies of water formed by retreating glaciers. Henry Greeley, who coined the term “Go West, young man!,” cited its natural beauty and “good carriage roads” whose 14 miles still can be traversed today.

Its management sometimes caused controversy, as in 1865 when detractors protested that the superintendent was cutting wood from hillsides to make more room for burials. But later historian Jane Marsh Parker gave this affirming summary of his management, which included such activities as:

“hunting down the alleged ghost that occasionally terrifies workmen, ejecting a troublesome trespasser, anticipating grave robbers, and… [for those] fearing that their dead might be buried alive, visiting the coffin during the night in the warm chapel where it was permitted to remain.”

Mount Hope Cemetery is a fitting place to remember Susan B. Anthony, her sisters who voted with her, and her friend in reform, Frederick Douglass.