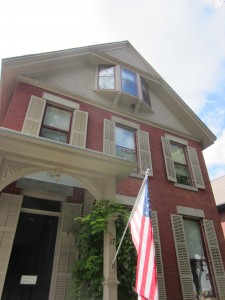 Susan B. Anthony gave approximately 100 speeches a year, by her own account, crisscrossing the United States to do so. Her woman suffrage campaign even took her to Europe and earned her an audience with Queen Victoria. Underlying her familiarity with travel, however, she had a strong sense of home and family that brought frequent bouts of homesickness and a longing for her kin.

Her biographer wrote, “With Miss Anthony the love of family was especially intense as . . . the parents, brothers and sisters filled her world of affection.” (Harper, p. 447)

The longing for home began when she attended Miss Moulson’s school in Philadelphia and persisted throughout her teaching and reform career. From one of her early teaching assignments, she wrote: “In the distance one could see the villages of Long Island, but I could think only of that village called home, and I longed every moment to be there.” (Harper, p. 43)

At the age of 38 Susan gave up teaching and remained awhile in Rochester, where every Sunday dinner was equal to an abolitionist convention.  She “always superintended these Sunday dinners, and was divided between her anxiety to sustain her reputation as a superior cook and her desire not to lose a word of the conversation in the parlor.” (Harper, 61) From these humble beginnings she grew into the woman who organized conventions for hundreds and gave well-written speeches.

Despite her crushing schedule, family took precedence. During her business travels she frequently stopped with family for a week or two, and on several occasions returned to her Rochester home with a niece who took up residence with her and Mary for several years. In 1873 she stayed many months in Rochester to nurse her dying sister Guelma; devastated by her sister’s death, she gratefully accepted train tickets to visit her brother in Leavenworth. (Lutz, p. 161) In 1875 she spent nine weeks in Kansas nursing that same brother after a near-fatal gunshot wound.*

*That event will be the centerpiece of Book III in my Dauntless Series. Book One will be released in early 2017.

5 thoughts on “Was Susan B. A Homebody?”