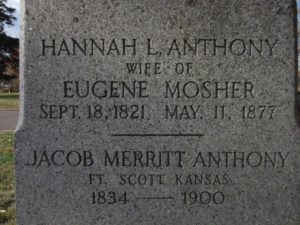 Hannah was the third child of Lucy and Daniel Read. (Imagine D.R. growing up with three older sisters!) There are suggestions that she also taught (like Guelma, Susan, and Mary) before her marriage to Eugene Mosher in 1845, for which Susan helped make a Feathered Star quilt. Susan’s diaries and biography demonstrate that the three oldest sisters remained close all their lives, for they all lived in two red brick houses on Madison Street in Rochester.

Hannah bore three sons and a daughter. By the time her sister Guelma died in 1873, Hannah was already showing signs of tuberculosis herself and, at the urging of Susan and D.R., spent time in Colorado for her health and then took up residence in Leavenworth with D.R.’s family. Eventually Hannah’s husband and children were called from Rochester, and she succumbed to her illness.

She was buried in Leavenworth, KS, the first of the clan to be interred there. Susan stayed in Leavenworth for six more weeks, eventually returning to Rochester with Hannah’s only daughter Louise, who would live with Susan and Mary until she graduated from the Rochester Free Academy. (Harper p. 477)