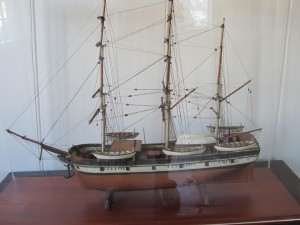 Recently I watched In The Heart of the Sea, a visual feast for those interested in the whaling industry of the mid-nineteenth century. I found several noteworthy parallels with the book I’m writing about Daniel Read Anthony’s bride Anna Osborn, who grew up in Martha’s Vineyard, one of the great whaling communities of that era.

Many aspects of the film were supported by the research I did for my upcoming novel. Aboard the whaling ship Essex, Captain Pollard and First Mate Samuel Chase are stalked by a vicious whale akin to Moby Dick. Many of the crew perish before returning to their home port of Nantucket.

Chase’s leavetaking from his pregnant wife, not knowing how many months he will be gone, is a poignant reminder of the harsh separations that whaling families endured. By marrying someone from off-island, Anna Osborn chose a different life for herself.

The messy and smelly tasks of processing (“trying”) the dead whale were portrayed briefly, with a comment that the oil from the whale’s head was especially valuable. This is the part that was used for spermaceti candles. This ship got around 40 barrels of oil from one large sperm whale. Martha’s Vineyard in the 19th century was home to a large spermaceti candle factory.

The presence of black sailors aboard the Essex was typical of the whaling industry. Whaling ships often stopped in Africa or Cape Verde to take on crew, and many of those dark-skinned people later moved to the Massachusetts islands.

As I watched the film’s Essex burn, I thought of another ship that burned while its crew watched. That was the Ocmulgee with 250 barrels of oil, captained by Anna’s brother Abraham Osborn and sunk by the Confederate Navy at the start of the Civil War. At least the crew of the Ocmulgee survived.

At the end of the film, a survivor of the Essex remarks on the discovery of oil coming out of the ground in Pennsylvania. This factual event, which occurred in Titusville, PA in the 1850s, signaled the end of the profitable whale oil trade that required such sacrifices on the part of both human and whale species. Within a few years, Martha’s Vineyard ships turned to the gold trade on the western shore of the United States; later, tourism became a major source of income on this beautiful Massachusetts island.

The film is a tale within a tale that portrays young Herman Melville interviewing one of the Essex survivors in preparation for writing Moby Dick. I wondered why, when the cinematographers credited that work as one of America’s heroic epics, the film did not use American scenery. The credits listed England, Spain, and the Canary Islands as the locations, when it would have been so appropriate to set the film in places that Melville actually frequented such as whaling ports on Nantucket or Martha’s Vineyard, or in New Bedford with its Seamen’s Bethel.

The above photo is of a whaling ship model photographed in the Edgartown Museum on Martha’s Vineyard.