Where to Fall in Love 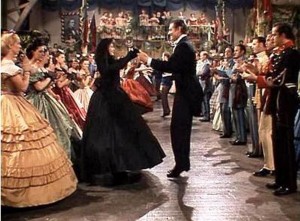 Two nights ago I attended the “Turning of the Year” Ball for the English Country Dancers. It took place in downtown Rochester at the Jonathan Child House, a pillared mansion with polished wood floors, glowing chandeliers, high ceilings, ornate moldings, and a delicately turned staircase.

The three-piece band sounded lush in the perfectly-sized room; the ladies looked lovely and the men dashing. When the music swelled and I glanced flirtatiously at my partner of 4o years, I felt my heart expand inside me.

If I weren’t already in love, this ball would have been the perfect place to begin. That’s why it’s easy for me to imagine Daniel Read Anthony and Anna Osborn discovering their attraction for each other at a ball.

In the nineteenth century, most people took dancing more seriously than they do today. For example, The Laws of Etiquette (1836) explains how a master of ceremonies would take care “that every lady dances, and press into service for that purpose these young gentlemen who are hanging round the room like fossils.” Gentleman who did choose to fossilize in said fashion were cautioned that “to usurp the seat of a person who is dancing is the height of incivility.”

Ladies chose their attire with care, giving preference to light colors, with widows wearing dark violet or black. Wearing gloves was so important that ladies often carried an extra pair. Although they had a variety of dress options, gentlemen, then as now, always knew what was appropriate: “He should wear a black dress-coat, black trowsers [sic], and a black or white vest, as suits the taste of the wearer; a white neck-tie, white kid gloves, and patent-leather boots.”

A program of dances was pre-arranged and handed to guests as they arrived so they could fill their dance cards early in the evening. It was considered improper to dance more than a couple dances with the same partner, no matter how infatuated they were with each other.

Between 18 and 21 dances comprised the evening, which often began at 8 PM and included a midnight supper for intermission. Like English Country Dance, many of these numbers took place in two-couple sets, so dancers interacted with a large number of people and were in almost constant movement. Some of these dances were called (like square dancing), but others were memorized. No slouches, these dancers! Their program included a variety of cotillions, waltzes, quadrilles, and often concluded with the boisterous Virginia Reel. (The photo at top likely depicts the Virginia Reel.)

We know from the society page of the Leavenworth Times that Daniel and Anna Anthony attended at least one such function. A society girl, Anna probably grew up dancing, but with his Quaker background, D.R. would have had to resort to instruction as an adult.

Despite his rough-and-ready attitude towards most other things, D.R. must have been at least a passable dancer or he never would have risked venturing onto the dance floor unprepared. Daniel Read Anthony was nobody’s fool, and only a fool would have disregarded this maxim from The Laws of Etiquette: “If you have no ear (that is, a false one), never dance.”