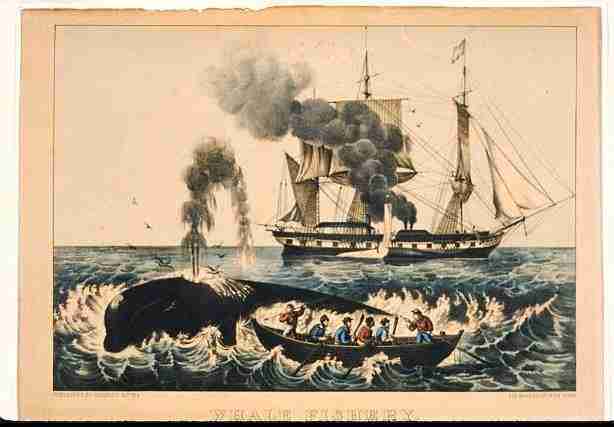 In the foreground of the photo above you can see a whaling crew attacking a sperm whale, the species that provided oil prized as an illuminant and lubricant. Seen through 21st century eyes, hunting this giant mammal is an ecological crime. (No doubt they were hunted almost to the point of extinction.) But seen through a 19th century lens, whale hunts filled a need as much as today’s natural gas drillings or Texas oil wells.

Before electricity, sperm oil was used to heat buildings and later, became an essential component of sewing machines, watches, and even locomotives. When its use was outlawed in the automobile industry in the 1970s, the number of transmission failures doubled.

It’s little wonder that Annie Osborn did not want to marry someone who attacked these giants to harvest sperm oil. Whale hunting was a dangerous, smelly, messy process that involved absences of up to five years from home. Voyagers suffered weather hazards and, in the case of the Ocmulgee captained by Annie’s brother Abraham, Confederate pirates. Nevertheless, Lucy Hobart Osborn accompanied her husband on many voyages and, according to the book Whaling Wives, was quite the navigator.

Abe Osborn captained a whaler named the Osmanli on a voyage in 1878, accompanied by Lucy and their daughter Annie. (Was the child named after her sister-in-law Annie Osborn Anthony?) Here is an account of their narrow escape from the sea near Mexico, beginning with a report from the Whalemen’s Shipping List from New Bedford:

“Osmanli got into the breakers at Altata, 160 miles north of Mazatlan, March 8, and became a total wreck. The crew lived on the beach two weeks and gained a scanty subsistence until the schooner Eldorado took them to Mazatlan. The men complain that Captain Osborn left them there to shift for themselves . . . .”

“Abe Osborn had not only the responsibility for the vessel and the crew but for his wife and daughter. One may only guess how he tried to cope with the situation, and how he got Lucy and Annie safely to the beach, probably in fog….”1

Lucy and Annie did not sail with Abraham again. Later, when Abe voyaged on the whaler Orca, mother and daughter met him in Boston.

Photo from Library of Congress